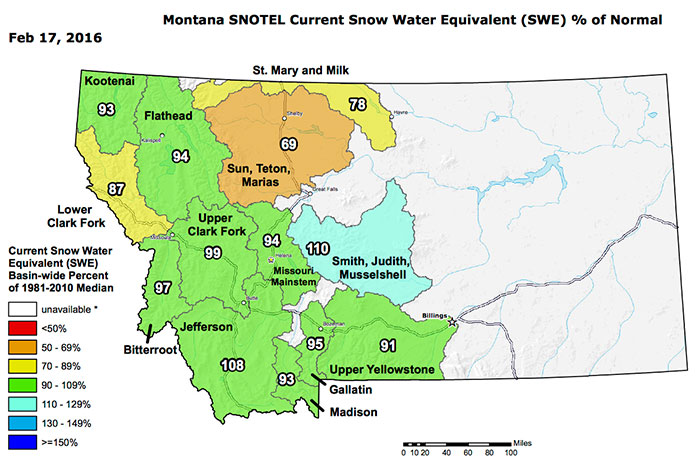 The image above shows current snow water equivalent by river basin.  Notice the dates range, 1981-2010.  These percentages would actually be lower if the data included the 1970’s as Montana received more snow back then.  Earlier today, it was raining.  Yes, raining in mid-February at 6666 feet of elevation. Sure, it was snowing in the high country, but rain at this time of the year is a little alarming to most folks who call this place home.  In the early afternoon, the temperature started to drop and snowing began to fall once again around West Yellowstone.   in the matter of a few minutes, winter returned.  With any luck, we’ll continue to see moisture build up in the form of snow and not rain.  Most of us wold like to see the snowpack sitting around 110% right now, but we’ll take this as compared to a year ago.

Rain and warm temps make the snow pack form a crusty layer on top, thus providing a hard living for those animals needing to get down to the food below the surface. This layer will not simply go away, but will stay there as more snow falls on top over the course of winter.  While out in Hayden Valley yesterday, I watched a fox make several leaps into the air trying to break down through the snow and get the rodent it was after.  The fox succeeded, but only after busting the hard layer, digging with it’s paws through the icy snow and then pouncing once again.  It was a ton of work for the fox for such a small reward.  It got me thinking about this winter and the warm weather we’ve all been witnessing during “winter”.  The day time highs all around Montana have been very warm over the past couple of weeks and most, if not all, the snow at lower elevation is gone.  While this can happen and isn’t something to freak out about, it’s not normal what so ever.  There is plenty of time for more snow to fall, we just need the daytime temps to stay below freezing so that we don’t keep loosing the precious moisture that’s already accumulated this season. For those of you who are thinking about spring time fishing, pay attention to how warm the temps are over the next couple of months.  If things stay warm like this through February and March, fishing is gonna be very good in April and May.  If this season is anything like the past few years, spring angling opportunities  in Montana and eastern Idaho should be plentiful.